If you read my last blog post about the cutting large holes in my van, you know I made a pretty major mistake in thinking that a flat RV window was going to conform to the curved sides of our Chevy Express. I was actually pretty stressed about leaving a gaping hole in the side for a couple weeks to source and ship the proper window. Turns out it wasn’t that big a deal: I just put the cut piece back in place and duct taped the hell out of it.

In the meantime, I was impatient, and decided to continue work. I finished one wall in the van, and built the dinette/bunk. Doing some of these steps out of order proved to be a total PITA later, as I’ll point out. I’ll be detailing all the work that went into the walls and bunk in future posts.

I decided to get a much larger window from a conversion van, instead of having two smaller windows. After some research, I settled on one from CR Laurence. I like this one because it is “all glass”, and has more of a factory look. Plus I really liked having a crank-out lower section. It retailed for $450, but I was able to find a used one from Waldoch in Minnesota for $250. Unfortunately, it showed up without the screen, so I’ll have to have that made later.

Cutting out the rest of the body metal was fairly uneventful. Again, I laid down some tape (I used duct, but I’d recommend masking) to protect the paint. Once the metal was out of the way, I found myself regretting my impatience from the previous weeks. How was I going to cut out the inner wall that I had just installed? I got out my sawzall, which seemed to work pretty well. Problem is, it’ll cut into metal just as easily as wood, and I caught myself sawing into the outer body metal a couple times. Plus, my interior paint job looked like hell after the jigsaw got a hold of it. Luckily, nothing I couldn’t cover up.

Once I had a hole all the way through, the window was fairly easy to install. There was an inner ring that sandwiched the body metal to the window, securing it with sheet metal screws.

Here is where I had to get creative with some finish carpentry work. The wall I had installed followed the contour of the van, so I had to create an inner frame that followed that contour. I used some leftover paneling that I had from the wall, and used the jigsaw to create pieces that would fit. It took a lot of trial and error, but I feel like they turned out all alright. I then used some thin trim pieces to round out the look. I will say that having a miter saw and air compressor with finish nailer helped immensely here. I can’t imagine having to nail all these by hand.

So there you have it. Probably the most heart-stopping parts of this build are in the books, but I’m sure more challenges lie ahead. Hope you enjoy!

View all posts by Tim Jones

About Tim and Charisse 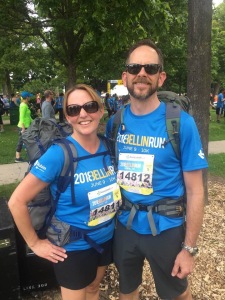 Just a couple of crazy kids in their mid-40’s who crave adventure.  When we’re not seeing the country in our semi truck, we call Wisconsin home and spend our free time mountain biking, hiking, kayaking, and with family & friends.  We have two amazing adult children, who share our love for adventure, the outdoors, and seeing the world.  We strive to live every day to the fullest.

“You only live once, but if you do it right, once is enough.”